Kieren Lewin lives a self-sufficient lifestyle on a 26ha property at Elphinstone in central Victoria.

On his property is a recycled house that is equipped with a stand alone 4.1 kilowatt solar energy electricity system, 150,000 litres of rainwater storage and an A and A worm farm septic waste treatment system. Kieren bought the land 3 years ago and then went looking for a house. He saw what he wanted in the Melbourne suburb, Bentleigh, where he found a 3-bedroom weatherboard with a metal sheet roof.
“Recycling an older house is cheaper than building new and then you can reconfigure it to what you want,” Kieren said. Kieren realised later another big advantage to recycling an existing house is it greatly reduces the time before the house is ready to live in. 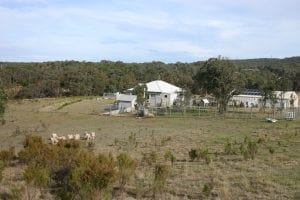 Kieren Lewin discovered one big advantage to recycling an existing house is that relocating it greatly reduces the time before the house is ready to live in.

Kilmore House Removers relocated Kieren’s house on to his property and also sank the stumps to rest it on and renewed the roof. He was given the house at lock-up stage and then it was up to him and his “Uncle Max” Allen, a registered builder from Castlemaine, to complete the insulation, reinforce some internal framework, replace floorboards, create doors and renew weatherboards. Before they sealed the interior and exterior walls Kieren organised for a plumber and electrician to visit. Prior to the electrical wiring being installed a backhoe operator was hired to dig 1000 metres of trench for a telephone line and some water pipes. Once the electrician and plumber were virtually finished Kieren and his uncle began work.

“Uncle Max did most of the building work on the house,” Kieren said.
“He is one of those old school builders, he can do many different jobs.”

Living self-sufficiently off the grid

The open plan living area has access to a northeast facing external deck. The bedrooms are located in the western and southern sections of the building while the kitchen and main bathroom face north. The pantry and some kitchen cupboards and drawers have been recycled from the previous kitchen and the bathroom retains a vanity basin. 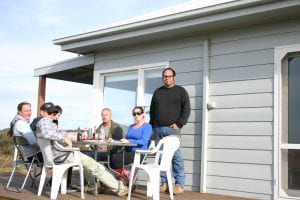 Find some land, install sustainable energy, waste and water systems and you can live a self-sufficient life like Kieren Lewin (standing).

The recycled house has an above average energy rating

The recycled house has an above average 7.1 energy efficiency rating.

To obtain this rating Kieren installed insulation under the floor as well as in the walls and ceilings. Under the floor and in the walls there are R-3 batts made of Dacron (plastic fibre) and in the ceiling there is a double layer of R-3.5 fibreglass batts. Kieren has also laid reflective builders wrap as sarking across the roof’s rafters directly underneath the corrugated metal sheet roof.

He said some people didn’t realise they should only put sarking under corrugated metal roof sheets as this allows ventilation.
Sarking laid directly under flat metal roof sheets can form condensation that will damage metal and timber. 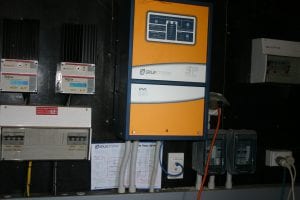 Keiren Lewin installed a stand alone 4.1 kilowatt solar power electricity system on his property in central Victoria and it has not let him down in 3 years.

To avoid overcharging there are two Tri Star Solar Charge Controller units that regulate the amount of charge coming from the panels flowing into the battery bank.

Kieren stores the power in six 4-volt deep cycle lead acid Excel Energy model batteries that have so far needed minimal maintenance.
“I check the acid levels in the batteries basically every 4 or 5 weeks,” Kieren said. Keiren has installed 13 watt LED downlights throughout the house and 5-watt fluorescent lights for external lighting. He said he has not experienced any power shortages in his three years on the property despite using a variety of household appliances including a microwave, kettle, toaster, energy efficient fridge, washing machine, flat screen TV, telephone and computers.

How to keep a recycled house build going if delays arise

He said it took just two months to make the house suitable for inhabitation, or three months if you count the time it took to move it on to the property then restump it and replace the old roof.

Kieren believes the key to the short time it took to relocate and renew the house was due to a disciplined project management approach.
“If you want to keep (the project) within a certain time and budget you want to project manage it,” Kieren said.

One tip Kieren believed would be valuable advice for anyone thinking about recycling an old house was to anticipate delays and have the materials you need for the project on hand. Kieren said he had always planned to gather building materials, pipes and other plumbing fittings before any tradesmen were required on site for two reasons.

This way he could judge the quality and manage the costs of the materials he needed as well as have materials available when required and so not delay the building process.

“If you have got all the materials (on site) then you can give the tradies a no stress option,” Kieren said. Kieren said being a former building project manager made him aware the biggest time waster on site was altering a design mid build. He said his project progressed well apart from a minor delay due to building the office extension on to the original house design. 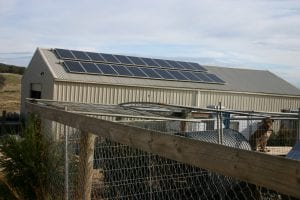 The shed on Kieren Lewin’s property with his 185 watt BP Solar panels has its roof pitched at 22.5 degrees to allow maximum exposure to the sun.

Simon Pinder
The founder of Farm Real Estate, Simon Pinder, worked as a metropolitan, rural and regional journalist for almost 20 years. In his professional career Simon reported extensively on rural property issue at both state and national levels. He has also covered residential and financial investment issues in his career.
Previous Post How to make a Straw Bale house Next Post Sunraysia market garden farm land in demand 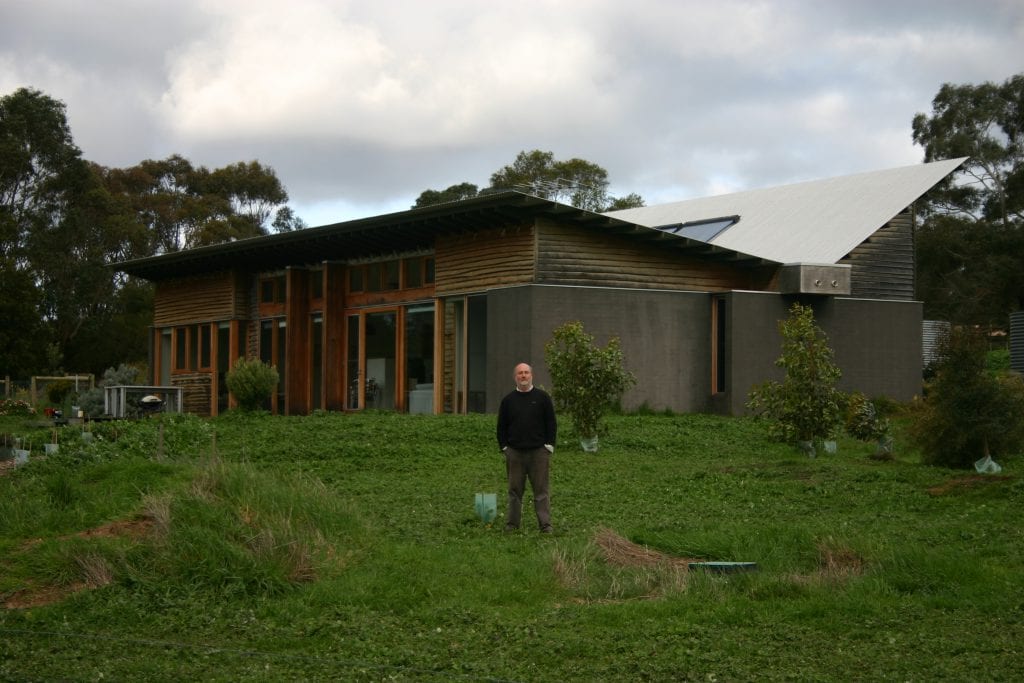 September 6, 2012
Green House
TIM Adams and Pip Watt live in a sustainably built, energy efficient house that is warm in winter, cool in summer and has no bills all year round. Tim designed their 7-star energy rated home on about 7ha at Gherang…
Read More
You must be logged in to post a comment.